Foreign Music, in a Foreign Language

Notes on learning Mongolian music from half-way around the world. 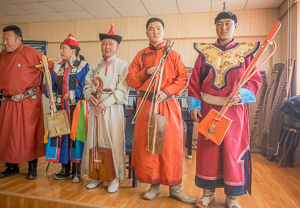 For almost two years now I've been trying to learn to play Mongolia's two-stringed national instrument, the morin khuur. For the first six months, I had a young enthusuastic teacher who I met with on most weeks, until his schedule became pressed and our lessons became erratic. For months I hoped the situation might improve, but eventually, with remaining time in Mongolia coming to an end, I looked for a more reliable match, which I found with the help of my friend Bayaraa at the Unversity of Arts and Culture. By phone, text, and email, she set up an initial meeting with O. Battugs in his office.

Then, a last minute message that there would be a change of plans. Yes, meet at his office. No, no instrument, but if I had a camera, I should bring it. There would be a symposium. I could record musicians playing traditional music. 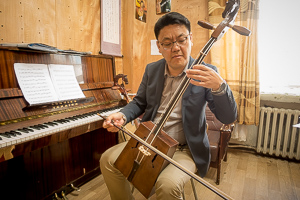 Meeting Battugs, in his office

For another two months I came to his office once or twice a week. At these meetings he would play and I would record, or I would play and he would listen, then help with areas that were problematic for me. In return, I would help him with his English, especially vocabulary he needed when talking about his profession to English speakers—the names for each finger, parts of the arm, as well as a translation for different parts of the morin khuur. Near the end of my stay in Mongolia, I asked Battugs if he would like to continue to meet once I returned to the United States. "Teem," he answered. So we set up and tested our Facetime connections at one of our last meetings.

For over a year now, we have met at around 8pm on my Saturday nights, or noon on Sunday in Ulaanbaatar. During this time he and his wife have had their first baby, a girl. Battugs, who has also been taking English lessons in Ulaanbaatar, has had practice speaking in English. I still keep my Mongolian dictionary handy, and there are times when we just have to settle for good enough, but overall his English has made solid progress, as has my playing. 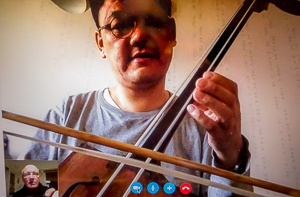 It has taken a while to iron out reliable hardware and software for these meetings, and so far we have come to expect glitches from time to time. Initially we were able to connect with Apple's Facetime, since I was using a mac and Battugs had an iPhone. When that proved unreliable we moved to skype and had good luck with that until Battugs developed hardware problems with his phone. He suggested Facebook's Messenger, which did not fix the problem with his phone, but that is where we have ended up. I use it on an iPad mini, he uses it on his Samsung Galaxy 8 phone. This allows us to chat, to walk around and show each other what we are trying to explain when words, either English or Mongolian, are not doing the job—what a turkey looks like, or a canoe.

To record the music that Battugs plays, I use. . . a camera. I realize how dark-ages that sounds. When we were on skype, using my laptop, I had looked into ways to record video from the screen, but could not work out a way to also intercept the audio. And I had problems switching between applications while maintaining a conversation with a tenuous connection. Eventually I settled on the same tool that I used in our first meeting, my small Sony camera, focused on the screen instead of an actual musician. Yes, audio quality is limited by the speakers in the laptop or iPad, but it is much more limited by the quality of the connection for whatever service we are using, which affects the quality of a screen capture as well. Facebook seems to be working, though no matter what I am doing I get ads now for Aeroflot, Russia's national airline.

This is not techology suitable for audiophiles. It sometimes requires imagination to fill in rough spots. But unless you expect to live in a very perfect world, it is still a miracle to be learning music from someone half way around the planet, to see his daughter take her first steps, to hear from your Mongolian teacher that "practice is good."

Once I have a new recording, the next problem is to learn to play it. My first teacher, Munkhjin, is the son of Purevkhuu, a famous Mongolian musician and conductor, who leads orchestras of morin khuur playing musicians in both traditional Mongolian and classical European arrangements. Following in his father's footsteps, Munkhjin is an accomplished conductor, but also a wonderful arranger, with the ability to distill Mongolian melodies into notes on a scale. Munkhkin gave me written sheet music each week to take home and learn, marking it up when necessary for fingering and bowing. In an effort to improve my long-term difficulty with reading music, I would take his marked up copy and transcribe that to a tidy version that was easier for me to read. For a while I thought I was making progress. 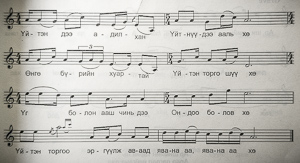 In my first few lessons with Battugs he wrote out some music for me in the blank lined pages of my music notebook, which I also re-wrote. Once I had learned those written pieces, he offered new lessons with the gesture of holding both hands up to his face like he was holding a potato, squeezing with his right index finger, and saying, like it says on the button, "Rec, Rec." Record. At first I transcribed these into notes, but I was soon stuck on even the most fundamental issues. A quick look at written Mongolian music in a book I bought showed where the problem began. In even the simplest tunes, it is common to change time signatures frequently, even after every other measure. A whole category of Mongolian music called Long Song is written with no strict prescription for time. Given much time and effort, it would be possible for a skilled musician to code this music into written instructions. I am not that musician. When I told Battugs what I was trying to do his eyes opened wide. "Oooh, very difficult!" he told me.

Even though Mongolian music can be and is written, many sources acknowledge this difficulty. I have several books of written Mongolian music, but that is not the way my instructor is taking me. The traditional way to learn Mongolian music is to listen and imitate what you hear. That is what I am doing.

Help for Seeing the Unwritten

Though I am learning by ear, I have found ways to improve upon the over-and-over method of learning a new piece. I've tried several technologies that haven't proved useful, and have settled on one method which for me is the most helpful. It involves both digital tools as well as paper and pencil.

The biggest problem I had trying to write this music, especially long song, is that I could not break it into measures. No matter what time signature I tried, I would quickly become trapped by notes that did not fit into a measure, crossed a bar, and more importantly, became disconnected from the motion of a bow. Focusing on this last problem, I came up with this way of marking the pace of bowings, and to preserve this visual record so I could carve off small pieces at a time to practice. 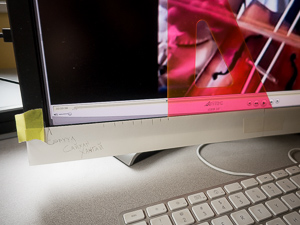 First, I open the video file on my computer. I'm using Apple's Quicktime, so when I stretch the video's window the width of the screen, I can see a time scale that is the length of the video. (For consistency and repeatablilty, I set this size with View > Fit to Screen.) I position the video so its time scale is at the bottom of the screen, then tape a strip of paper across the entire bottom edge of my monitor, adding a mark to index it to the edge of the screen. On the paper I mark each upbow, starting with the first note. Sliding a drafting triangle along the bezel of the monitor helps with precision, and I find the exact point where the bow changes directions with the arrow keys, creeping back and forth a frame at a time to get it right. In short order I often discover that the bowed "measures" are not the same length, and that they sometimes appear in a sequence. (— - — - — - - —)

Once this is done, I can use Quicktime's in and out markers to play one small section at a time, in a loop or at reduced speed. Eventually I can take on bigger chunks.

Here is a list of music that I am either working on or have on my agenda for future work. On this list, the work Homework indicates that I've posted an attempt in public. I hope to replace these early efforts as I get better.